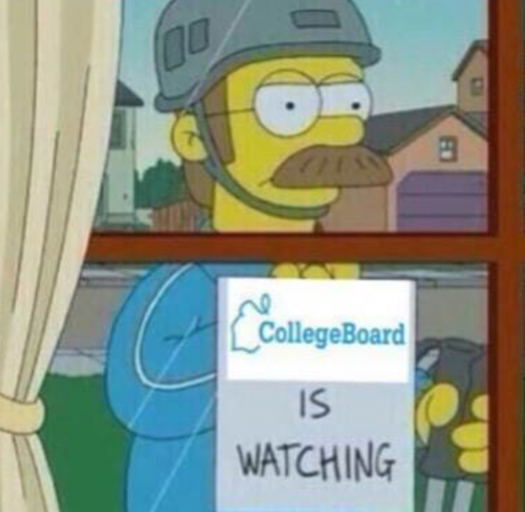 ▲
It's always watching.
The Simpsons

▲
It's always watching.
The Simpsons

A great evil looms over humanity today.  It creeps within the shadows of our existences, and asserts its omniscient presence over our every move.  With every waking, breathing, living moment, millions of people across the nation – if not the world – cower in fear of what this evil has in store for them. Thriving off of pure misery, this vile demon gladly drives good people into poverty, innocents into madness, and once-happy souls into early graves. Though it is nigh universally detested, there is none brave nor strong enough to vanquish this looming Goliath. It’s likely that even now this it is watching, and I’ll be tried for heresy and slander soon enough. So before they have my head and what remains of your poor, unfortunate souls, be warned: the College Board is the embodiment of corporate greed, and they’re coming for you.

Now I know that many of you are afraid to offend our ever-so illustrious overlords, but there is no doubt that the tyranny of this organization unceasingly permeates our very existences. And their evil starts and ends with money. According to Washington Post education reporter Valerie Strauss, College Board’s president David Coleman received a whopping annual salary of over $734,000 in 2014. In a similar CNN report by Carol Costello and Bob Ruff, it was found that 12 of College Board’s executives made over $300,000 a year. And for what? For locking students in rooms for hours at a time and charging them hundreds of dollars in booklets that couldn’t have cost more than ten cents to print? For years of traumatic stress and waking nightmares about a single number? For turning the supposed “best years of your life” into one long spell of pure horror and dread? The truth is, as long as it turns a profit, College Board welcomes your misery with open arms and overflowing bank accounts. Their beloved ‘AP’ isn’t about ‘Advanced Placement’ so much as ‘Abundant Profits.’ This evil knows neither financial nor moral bounds and it will stop at nothing to set new world records for student destitution.

But of course, in exchange for your life’s savings and your sanity, at least the College Board promises that you can enter college prepared!  At least that’s what they’d like you to think.  Education writer Allie Bidwell from US News reported that in reality, over 50% of students taking the SAT are still not meeting the College Board’s own benchmark for college readiness.  Not only is the exam tediously expensive, it is not an efficient tool in either measuring or producing competency in the young adults that are going broke to pay for it.  The same level of insufficiency goes for the College Board’s AP exams.  In a recent New York Times article on AP credit, Pulitzer Prize winning writer Tamar Lewin revealed that at Dartmouth University, these “college-level” exams were found to be inadequate in testing mastery of the concepts that were taught during the earliest introductory university courses. Of over a hundred students who had scored a 5 on the AP Psychology exam, “90% failed the Dartmouth test.” Worse yet, one Dartmouth professor of psychology found that even after those students who had failed the university’s test had enrolled in Psychology 1, there was “no detectable difference whatsoever” between students who had “never taken the AP class” and those who had spent a year taking it in high school, paying for the AP exam, and passing it.  College Board’s exams masquerade as “cheaper alternatives” for expensive college courses, but in actuality, they contain nothing near the depth of content necessary for a university level education.

However, in spite of it all, perhaps the most infuriating thing about College Board is not seen in its exorbitant price tags or its meagerly useful, anxiety-inducing tests, but in the subtle nuances of its appalling audacity. This malicious organization cannot be satisfied with just your money and your soul – oh no – they need you to know how benevolent they are too.  The College Board has declared themselves a “non-profit organization,” a phrase that would generally seem to be synonymous with charitable, generous, and at least fundamentally decent work. While they would like the world to think their sole mission is to spread education and encourage college readiness, this ill-constructed ruse is fooling no one. These disgusting displays of self-righteousness only fuel our eternally burning fires of public hatred for this vile company.  College Board can claim it’s a non-profit when it stops monopolizing the collegiate exam industry at upwards of ninety dollars per AP test. Although the company makes claims that they “provide a $31 reduction per student with financial need”, this still adds up to the often unattainable sixty-two dollars per test.  An additional thirty-two dollars may sometimes be taken off the price of an exam for a low-income student, but only because the state provides this funding.  Though the College Board will only spare a measly third of its massive regular profits for students in dire need, it is still more than happy to go about labelling itself as a non-profit.  If the government weren’t paying them off, this greed-driven corporation would have no problem tossing low-income test-takers aside.  The abhorrent gall of the College Board in declaring itself a charity is a vile manifestation of the contrasting reality of their twisted corruption all the deeper.

So now you have it. The evil that hangs over us every day is much worse than any of us could ever have anticipated. Bad people might go to hell, but everyone, saints and sinners alike, must suffer the wrath of the SAT.  There might be an inferno burning in the depths of the underworld, but there are exam fees here on earth.  Sisyphus may have to push his rock hopelessly through the Fields of Punishment for the rest of eternity, but he will not know pain until he has studied for an AP exam. While it’s up for debate whether or not Satan is really out there, the College Board is for sure. In any place that greed, wrongdoing, or corruption persists, their presence is virtually guaranteed. Speaking of which, I must be going now – our eminent overlords should be coming for me at any minute.