Running Rebels Basketball on the Upswing 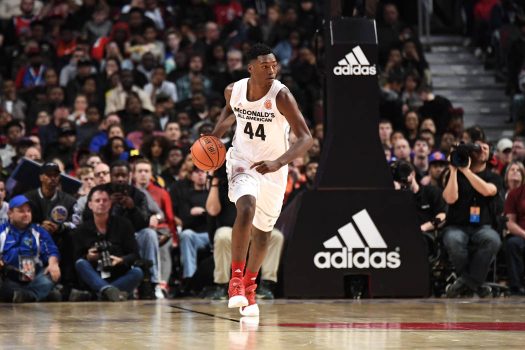 Over the past few years, the UNLV basketball program has been, well, a mess. Last year, it had an overall 11-21 record, ending at 4-14 in the conference. The Runnin’ Rebels haven’t made the annual NCAA March Madness tournament since 2013. They haven’t won the Mountain West since 2008. They’ve missed on dozens of big name recruits. And, they’ve run through three head coaches in two years.

But this year, the former National Champions from Vegas are showing signs of a comeback. Sure, this UNLV team will be unpredictable this the upcoming college basketball season, as they lost five of their top eight scorers from the 2016-17 season. And unfortunately, UNLV’s Mountain West rivals, the Nevada Wolf Pack (gross), still have four of the best players in the conference in Jordan Caroline, Elijah Foster, and Martin brothers Caleb and Cody. But with Colorado State losing a ton of front court talent and Boise State losing a pair of starters, the new-look Runnin’ Rebels, headlined by six new recruits, most notably five-star center Brandon McCoy, could make their way to one of the higher spots in the Mountain West.

Now, the additions of future NBA player Brandon McCoy and Junior College (JuCo) Player of the Year Shakur Juiston do seem very enticing, but – and I hate to write this – just don’t get your hopes up too high for UNLV basketball this year. After finishing dead last in the conference last year, the Rebels are still a long way off from returning to annual tournament appearances.

Don’t despair – if you’re a UNLV fan, there’s still hope. Sure, UNLV probably won’t be back in the NCAA tournament for at least another few years. But on the bright side, this year’s UNLV team is going to be genuinely fun to watch for the first time in a while, and that’s something to look forward to. Unlike last year, UNLV isn’t going to have quite as many high-profile games. Instead of playing big names like Duke, Oregon, and Kansas, the Rebels are only hosting the loaded Arizona Wildcats on the second of December. And while that game will certainly make headlines (because of the top players on Arizona), the Rebels will certainly hold their own, mainly thanks to a few key players.

This year, UNLV returns guards Jovan Mooring and Jaylen Poyser, who boast inefficient, high volume scoring that’s simply a blast to watch. It’s an ugly sort of basketball that epitomizes mid-level college ball. And best of all, the Rebels are bringing in the number 16 recruit in the entire national high school class of 2017: Brandon McCoy, who, after averaging twenty-nine points, thirteen rebounds, and five blocks in his senior year of high school, looks like he’ll give UNLV some much needed juice in their starting five. The McDonald’s All-American standout big is poised to be the face of the UNLV basketball program for the next few years. With impressive post strength and shockingly smooth touch around the rim 24/7 Sports ranked McCoy as the twelfth best player in high school basketball nationally this past season. He received offers from contenders like Michigan State, Oregon, and Arizona, but chose UNLV.

“No team in America has made bigger upgrades from a lower position than Vegas. The Runnin’ Rebels won’t be a top-25 team in preseason polls, but it’s not ridiculous to suggest they could round into that form come league play.” [1]

So, Rebel fans, maybe don’t expect greatness right away. But you can be sure that the UNLV Rebels basketball team is certainly running, sprinting towards success this season.