The New Faces of Clark NJROTC 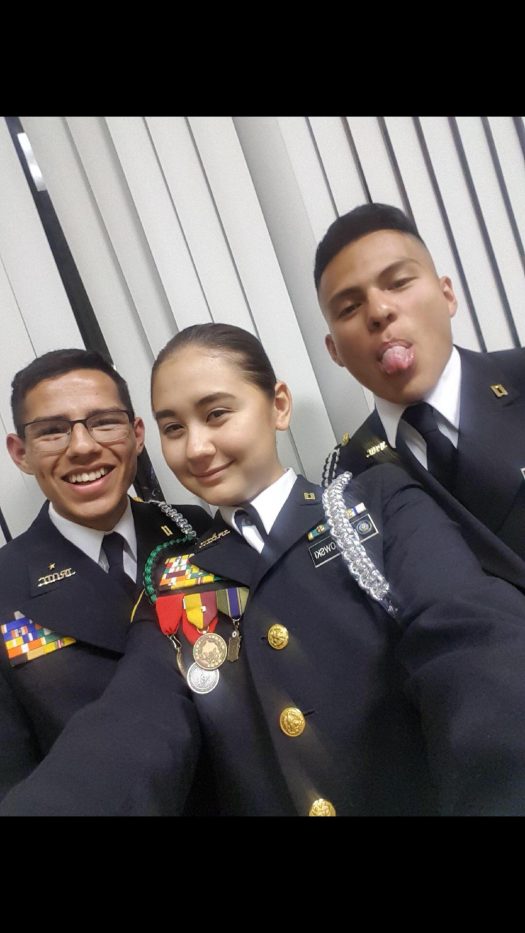 The Navy Junior Reserve Officers Training Corps, or NJROTC, is a program with a rich history at Clark. As one of the school’s largest organizations, ROTC students are involved in activities such as orienteering, drill competitions, and marksmanship. As an affiliate of the US Armed Forces, NJROTC promotes patriotism, citizenship, service, and leadership.

At Clark, there are three key student leadership positions. After all, leading approximately 300 students is no small feat and cannot be accomplished alone. NJROTC is primarily cadet-run, with the oversight of three instructors, or NSI’s. At Clark, our NSI’s are: Commander Daniel Jorvig, Chief Petty Officer Ross Bulda, and Master Gunnery Sergeant Douglas Webster. All three are prior servicemen; Commander and Chief are both former sailors, and Master Guns is a former Marine.

The NSI’s select the cadet staff for each year. The Cadet Commander, or CO, is the highest cadet in the battalion. As the central leader, the CO is accountable for everyone in the unit. Next in line is the Cadet Executive Officer or XO. The XO is in charge of the staff officers, and ensures that each staff officer is fulfilling their duties as assigned to them. Last but not least is the Cadet Command Master Chief Petty Officer or CMC. The CMC is tasked with the upkeep of morale in the unit, and is hierarchically higher than all enlisted rank cadets in the unit. As for the staff positions, they are specialized and pertain to each particular department, with department heads being the leaders for all actions that pertain to their prospective jobs.

“I’ve been involved with NJROTC for the past four years, and I’m excited to lead the program this year,” says Kolakowski. “We work really well together and have a very strong program here at Clark.”

Despite the dominance of seniors in leadership of our NJROTC, cadets of all grade levels may find themselves in positions to lead. First-year cadets may find themselves taking the initiative to be a squad leader, for example, or a second-year cadet may take the initiative to lead a platoon in the absence of the platoon commander (class leader). Point being, the success of our unit is a combined effort of every cadet. Learning how to be a part of a team early on leads to success in many endeavors in life. For Clark’s NJROTC, our teamwork and camaraderie is embodied by the black and gold we all wear.