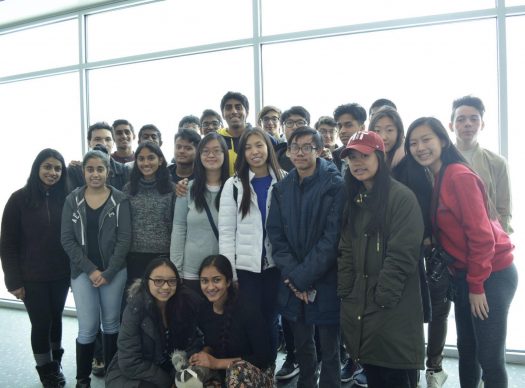 ▲
The team poses during a layover in Denver.
Vrund Patel

▲
The team poses during a layover in Denver.
Vrund Patel

Clark’s A team placed 17th overall, and the B team placed 36th. “We were honestly anticipating placement somewhere in the thirties, because that’s how we’ve always done at nationals,” says junior Simran Shah, who competed in Anatomy & Physiology, Forensics, and Optics. “We were really surprised when we first saw the results.”

The team overcame obstacle after obstacle to earn their spot at MIT. Flying to Boston at 4am in the morning Wednesday and returning at 4:30am on Sunday morning, the trip was full of sleepless nights. “I would say I averaged two hours of sleep a night over the four nights we were over there,” says senior Jay Desai. “It was painful, but it was worth it.”

Desai and his partner Aaron Sun (11) earned the team’s only top three medal: 1st place in the highly competitive epidemiology event Disease Detectives. “When we went up there, we got the stink eye from Troy,” he says. “They were just as surprised as we were.” Troy High School is the perennially top team in the nation in Science Olympiad, and earned the top placement in nearly every event at MIT. In Disease Detectives, they received a rare second.

“When they announced our name, I thought I had imagined it,” says Sun. “The crowd gasped. I mean, most national teams have never heard of Clark High School in Nevada, and for us to take first in such a competitive event was crazy.”

Top ten placements for the A team:

Top ten placements for the B team:

“We came to this tournament with a huge chip on our shoulders,” says senior and club co-president Shan Reddy. “I’m so proud of these kids; they studied insanely hard to place as high as they did. We’re only going to continue improving from here.”

The team had a quick turnaround, with the Golden Gate Science Olympiad Invitational at UC Berkeley on the 27th. The team left for San Francisco on Thursday morning only four days after returning from Boston, with another early morning 4am departure.

Science Olympiad at Clark is led by physics teacher Mr. Viggato and newly married duo Mr. and Mrs. Miller. “I feel like we exceeded our personal expectations,” says Mrs. Miller, formerly Ms. Erickson. “I’m proud of our efforts, and can’t wait to see what State brings.”