“Black Panther” movie review: Make social equality a reality, or wait for it to happen? 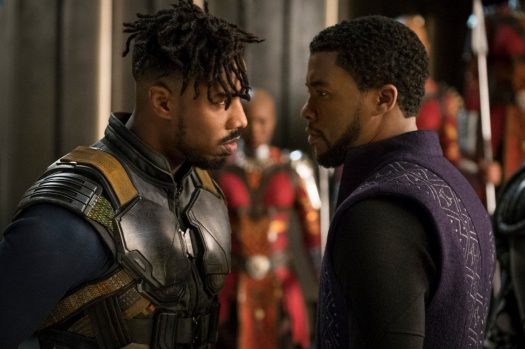 It’s rare for any series to make consistently quality movies for more than a sequel. When the Lord of the Rings pulled off three, it was historic. When Harry Potter accomplished seven, it was entirely unprecedented.

On February 16, 2018, Marvel Studios released its eighteenth film, introducing a powerful new hero, the likes of whom the world had never seen before.

Marvel Studios is a success story unparalleled throughout film history. While each installment in the franchise is fantastic in its own right, with the lowest rated film still standing at a respectable 66% on Rotten Tomatoes, Black Panther stands alone.

Oakland-native and director Ryan Coogler’s Black Panther’s opening weekend gross of $242.1 million was the second highest of all time, and the biggest debut by an African-American director. The film is not only the highest-grossing film of 2018, but also the third-highest-grossing film ever in the US, and the tenth highest-grossing film of all time. It opened at 100% on Rotten Tomatoes, and has since dropped slightly to 97%, still the highest ever for a Marvel film. Its incredible blend of cinematography, director’s features, breakout performances, and character dynamics make it well deserving of the $1.3 billion it has earned in only its first four weeks.

As the 18th installment of the MCU films, Black Panther was highly anticipated across the Marvel fan base. But Black Panther managed to reach beyond comic fans and send a serious message to people of all backgrounds across the nation in a time of great tension. As its February release came directly in the heart of Black History Month, it sent a great message of inclusivity, equality, and hope for discriminated minorities.

Black Panther challenges institutional bias, illuminating the backwards nature of our political climate, while making a powerfully relevant metaphor about modern American society. As discrimination and inequality still thrives, it prompts the question: Can we pursue infrastructural and technological progress as longstanding social problems persist? Black Panther adamantly and unapologetically says no.

Spoilers ahead. Black Panther follows the ascension, trials and tribulations, apparent death, and triumph of T’Challa, as he transitions from prince to king when his father is killed. In Chadwick Boseman’s first appearance in 2016’s Captain America: Civil War as T’Challa, son of the late Wakandan King T’Chaka, was an intriguing – albeit mysterious – new addition to the Marvel Universe. T’Challa plays the new king perfectly- facing his struggles, his challengers, rival tribes, and even the difficulties of love. He is not a perfect ruler, and throughout the movie we see that his imperfections are what make him so strong. He embraces his difficulties instead of repressing them, and confronts his father’s sins and mistakes head-on.

However, many have argued that Black Panther truly owes its success to the villain: Erik Killmonger, brought to life by the masterful acting of Michael B. Jordan. Killmonger’s sensical ruthlessness, exhibition of raw physical power, and complex history and upbringing make him one of the most compelling characters we’ve seen in superhero history since Heath Ledger’s Joker. While most movies are clear cut – a crazed villain carrying out a depraved plan that will end the universe – Michael B. Jordan’s Killmonger is not that. When Ulysses ‘Klaw’ Klaue, notorious arms dealer and son of Nazi war criminal Colonel Firtz Klaue, seems to be the focus of yet another template Marvel film, Killmonger makes a sudden and unexpected appearance as the true antagonist of the movie. But much to our surprise, Killmonger’s aims are not conniving, selfish, or evil. The son of an assassinated leader of the America Black Panther Party, he wants to arm the oppressed majority worldwide to create an equal tomorrow. And, even at the end of the movie, the audience wonders: was Killmonger really the villain?

Killmonger has one message throughout the movie that he embodies so well: oppression cannot be ignored, or it creates the monster you never expect. His character is a manifestation of the impact of socioeconomic and systematic oppression, which have morphed him into someone who simply wants social equality – and is fed up with waiting for it to happen. Killmonger attacks Wakanda, and condemns the nation for exclusively pursuing innovation and technological advancement while minorities worldwide face persecution and suffering. While the resolution leaves the main conflict satisfied, it leaves this true cause barely touched. It is this underlying issue – the issue of equality – that we hope we can rely on seeing in the next Black Panther movie.

As the penultimate release to Avengers: Infinity War later this April, Black Panther has become the final, groundbreaking seal on an impressive anthology of storylines and characters that Marvel Studios has spent over last decade constructing.