Las Vegas is building the Raiders a stadium! So, who’s paying for it? 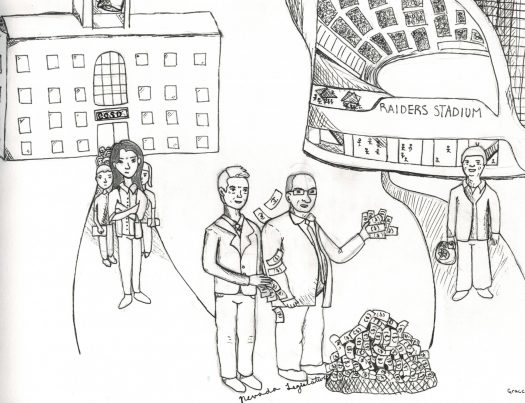 Around a thousand people showed up for the event, including Raiders Hall of Famers Fred Biletnikoff and Howie Long and even entertainers Carlos Santana and Wayne Newton.

The domed stadium is to be constructed on the UNLV campus, right across the highway from the Delano. According to the Associated Press, the stadium will seat 65,000, open in 2020, and be shared by UNLV.

And here’s the line we were all waiting for: the stadium will cost $1.9 billion. Professional sports stadiums across the US are state-subsidized, but this move to approve the stadium’s construction by the Nevada legislature will be the largest stadium subsidy in American sports history. Levied taxes will cover $750 million, and the rest will come from private investment.

Governor Sandoval stated that the relocation of the Raiders and the construction of their stadium will be highly profitable to the community and usher in a “new era of tourism” in Vegas. However, there is considerable concern that the move will be both excessively costly and even economically stunting.

“NFL stadiums do not generate significant local economic growth,” says Stanford economics professor Roger Noll. “And, the incremental tax revenue is not sufficient to cover any significant financial contribution by the city.”

Contrary to popular belief, the stadium will not be funded by direct taxes on Las Vegans – instead, funds will be drawn via an increase on the tax on hotel rooms. Currently, that room tax goes to support state schools and county transportation – the Las Vegas Raiders era will also usher in funding cuts to local schools and buses.

Even so, the construction and maintenance of the stadium will create countless of jobs for the local community. Right?

The stadium’s construction is projected to create significant economic growth locally, and hundreds of jobs will open up in service and maintenance. However, it may not be a particularly cost-effective way to boost the local economy.

At the end of the day, Vegas sports fans are rejoicing that professional sports are finally starting to make their way to the Valley. Last year, the Raiders were resurgent, and made the playoffs for the first time in over a decade. They’ve hit a slump this year, though – according to the NFL statistics site Football Outsiders, the Raiders have a 12% chance of making the playoffs this year.

Perhaps state officials could have looked to solve systemic educational failure in Nevada, reported to be the worst state in the nation for giving students a chance at success per a study by Education Week. Or, perhaps Clark County’s chronic teacher turnover issues could have been helped out with the two billion dollar subsidy.

“To me, it’s an issue of priorities,” says UNLV law professor Sylvia Lazos. “I’m disappointed that we’re willing to do that first before we invest in our kids.”

Perhaps, for Nevada state officials, the futures of our youth and students come second to bread and circuses in Las Vegas.