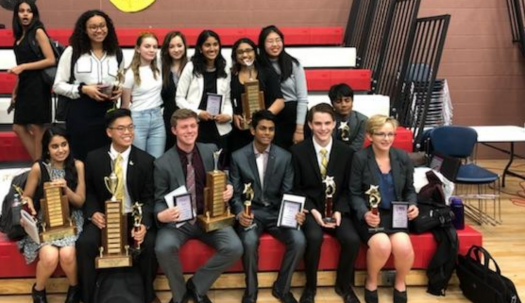 Clark’s Speech & Debate team competed at the Golden Desert District tournament in hopes to qualify for every debaters dream: the national tournament. The tournament continued over the span of 2 weekends and was held at Spring Valley High School and American Preparatory Academy. Through perseverance, determination, and countless hours of preparation, Clark qualified more students than ever before. Clark is sending a total of 6 exceptional students to compete and represent Ed W. Clark high school at the national speech & debate tournament in Fort Lauderdale, Florida in June.

“The Clark Speech and Debate team closed out the season with an unprecedented victory qualifying 6 students for the National Speech and Debate tournament,” says team president, Manushri Desai. “I am so proud of our team for how much they’ve grown and accomplished within such a short period of time. I was privileged to have led this team towards unparalleled success throughout the season.”

Here are your qualifiers:

None of this, however, would be possible without the immense support and mentorship from club advisors Ms. Brown & Mr. Vigrass. Both put in endless hours into helping prepare our chargers for competition.

“Ms. Brown has always been supportive of the entire team,” says national qualifier in big questions debate, Katherine Van Voorhis. “I wouldn’t have qualified this year if it wasn’t for Ms. Brown encouraging me and helping get to where I am now.”

Clark’s exemplary performance throughout the year secured a position at the top of the Golden Desert District. As the school year approaches its end, schools around the valley are aware of the unparalleled talent among Clark Chargers. And as June comes around, our 6 qualifiers will leave their mark on the national level.

“I can’t wait for our chargers compete at nationals,” says Desai. “Success is inevitable.”