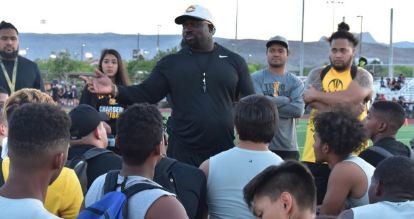 Clark High School is going into this year’s season as the underdogs of the 4A division. It’s been years since our football team has had a winning season, but Clark’s second-year football coach Rickey Pickens is ready to lead his team to the playoffs.

In order to bring the Chargers to that winning season, the offensive game has to be strong. The Chargers’ offensive coaches Rick and Reeder make sure their players know what to do and how to do it. “The offense has to be consistent,” says Coach Reeder. “Once we are disciplined, we will execute properly and win games.”

Clark’s impressive offensive team isn’t the only thing that the Chargers have to look forward this year. Defensive coordinator Coach T has been conditioning the defense to make sure the team can play well. “Clark has to stop playing down to competition and stay focused,” Coach T says. He knows that the key to winning has to be consistent defense through the fourth quarter.

Head Coach Ricky Pickens is also ready to make some changes. He plans to come back from last year’s losing season by “competing and getting better”.

The coaches and staff of the football team are not the only part of the team who are excited for the new year; the players are ready to take the Chargers to victory. Varsity player and senior Isaiah Bigby has confidence that the loss against Virgin Valley won’t happen again in the rest of the season. Starting quarterback and offensive stats leader Jared Jenkins agrees that making it to the playoffs is the number one priority for the football program.

We are excited to see the Chargers outperform last year and go into a winning season.