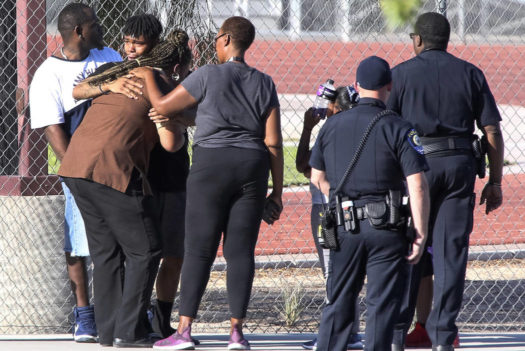 An 18 year old student was shot and killed on campus at Canyon Springs High School on Tuesday, according to North Las Vegas Police. The shooting occurred on the northwest corner of campus near Alexander Road and 5th street.

The Las Vegas police reported receiving “hundreds” of calls directly after the first shots were fired. Police say the the tragic event was a targeted incident and not an attempted mass shooting. Instead, they are investigating to see if it may have been gang related (per Katherine Jarvis [kntv]).

The victim, who was transported to a nearby hospital, died soon after the shooting. He is confirmed to be a student enrolled in Canyon Springs High School. No suspect is currently in custody, but the police are currently interviewing witnesses to locate the shooter.

The shooting occurred after school on September 11th. Hundreds were still on campus, and the school was put on lockdown until 4:40 p.m.

“Today, after school, there was a targeted act of violence outside of the Canyon Springs High School building, and a life was lost. On behalf of the CCSD Board of School Trustees, I extend my condolences to the victim’s family.

While most students had left the campus for the day, several hundred magnet students and athletes were on campus. I want to thank administrators and teachers who worked quickly to ensure all students were moved into the school safely for our lockdown procedures. Staff members followed their training and kept students calm until the lockdown was lifted.

We are thankful for our School Police who were already on campus and were able to respond immediately. We are also grateful for the response and partnership of the North Las Vegas Police Department, who provided assistance to contain the situation quickly. North Las Vegas Police are the lead on this case and will join School Police for an increased presence on and around campus tomorrow.

School will be in session tomorrow at Canyon Springs High School and counselors will be available to all students and staff in need.

If anyone has information regarding today’s incident, please call school police at 702-799-5411 or local law enforcement. “