Chargers soccer on the road to state tournament 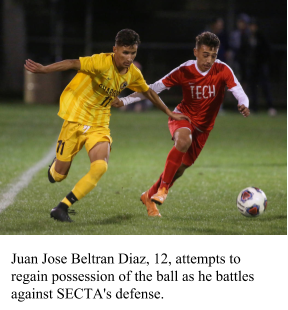 Last Tuesday, the Clark boy’s soccer team beat Southeast CTA in the quarterfinals for a spot in the Desert region semifinals. The Chargers were victorious over the Road Runners, with scores from Captain Jacob Solis and Abraham Dolley.

“We all not only played strong physically, but we played strong mentally. We put our hearts on the field, and that led us to play better than any game we have ever played,” says Right Midfielder Edgar Huerta.

By the first half of the match, Clark and SECTA were in a deadlock, with neither team managing to score a goal. In the second half, Captain Jacobo Solis scored the first goal of the game. This was answered by a goal from SECTA, but with less than ten minutes left, Abraham Dolley scored to secure the win for the Chargers.

“Once Abraham started dribbling past the three defenders and scored a shot from outside the eighteen, that goal gave us twice as much energy than when we started the match, giving the other team a harder time to score again,” says Captain Solis.

The defense was led by goalie Bryan Miranda and defenders Mendez-Garcia and Huerta to lead their team to victory.

After their last season record of 1-14-3, the Chargers have made a strong comeback in hopes to once again become state champions. Clark plays again against the Coronado Cougars @ Bettye Wilson Sports Complex today at 4:00 p.m.