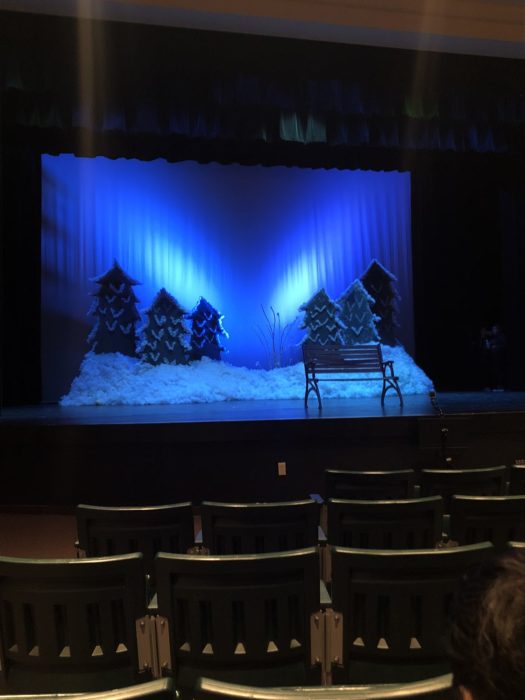 Clark’s theater department put on an excellent fall play in October centered around the theme of falling in and out of love.  Almost, Maine, a play by John Cariani, is made of nine short scenes that bring the audience on a journey following 10 couples as they develop their relationships in the almost-town of Almost, Maine.

The most impressive part of this production was how captivating and intriguing the show was.  The play began with two actors awkwardly admitting that they like one another, but one character is not ready for commitment. The story left these two with their relationship up in the air and turned to focus on numerous other story lines centered in this small, town-like region. We watched as a man who cannot feel pain fall for a girl he barely knows, we saw a married couple decide to separate as they fight over a missing boot and their loss of connection, and we sympathised with a man in a bar watching his ex-girlfriend have her bachelorette party while he falls for the waitress. All of the story lines were open ended, as intended, but the play concluded on a satisfying note.

Ms. Pennington, the director of Almost, Maine and Clark’s theater teacher, took a realistic approach to this production, with the goal of making the show as believable as possible.

“There is comedy in every scene but I wanted to treat it like [these events are] what really happened…Happily ever after is not true, so I played each scene as if it would be standing alone for its own merit, for how I wanted it to feel, ” said Ms. Pennington.

The crew for Almost Maine played a key role in accomplishing this realism. Working for over a month, they created elaborate and impressive set pieces including five homes, a restaurant, and many outdoor scenes, including a frozen lake. Northern lights flashed in the background as couples realized the truth about their relationships. Their costumes were even bought used so that the characters looked fitting in the rural settings.

Ms. Pennington was ecstatic about the team’s performance.

“I’m very proud of my students and their work on this production…I’m getting notes from people who watch professional theater, and they are bragging about how well the kids preformed. And attendance was up four times from what it was last year!”