Mid90’s: A Study in Adolescence 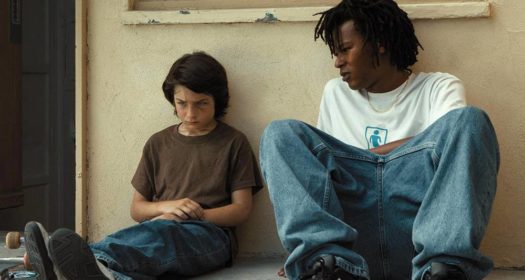 Jonah Hill’s directorial debut proves to be a shining star among first films. Declining the studio budgeting that a well-established star such as Hill could have received, the director, rather, opted to take a more stripped-down route, instead crafting something that one could consider a reflection of his youth. Jonah’s performances in front of the camera come in at a stark contrast with his artistry behind it. Audiences expecting the same brutal spectacle of “The Wolf of Wall Street,” the dumb smart comedy of “21 Jump Street,” or even the redemption story of “Moneyball” will leave the theater with those expectations subverted.

Mid90’s is not a thesis on the entirety of the 90’s, but rather a cross-section of the life of Stevie, a young, shy boy abused by his older brother and sheltered by his mother. Stevie, or as he is come to be known through the course of the movie, Sunburn, has an intriguing story arch that could be viewed through a multitude of lenses. While some may say that his odyssey to ultimately find a new family leads him down a dark path of drugs and alcohol, others could easily find solace in the unadulterated truth of friendships during those critical years of your life. Perhaps Jonah Hill said it best himself: Mid90s is about a time in your life when your friends are more important than your family. Stevie’s rejection of his mother’s hypocritical values and his brother’s confused brutality remind most audiences of a time in their life when they also valued friendships over family, which is not the negative thing that it sounds to be.

The movie follows Sunburn in his summertime quest to become acquainted with a local group of skaters that, in the early stages of the movie, he awkwardly admires from afar. Most audiences will be eerily familiar with the adulation of an older and cooler group of kids. Among the group is Fourthgrade, Ruben, Fuckshit, and Ray, all of whom prove to be dynamic characters struggling with their own cases of confused identity. In a monologue late in the movie, the group elder, Ray, dishes out the facts behind each of the clique members’ backgrounds. After learning of each of the children’s tribulations, the audience can’t help but be humbled by the lack of malevolence from any character in the film. Even Stevie’s older brother Ian, who could have killed his younger brother on at least three occasions throughout the film, is painted as yet another product of a dysfunctional adolescence.

Aesthetically, the movie glorifies the experience of growing up in the mid 90’s in a number of ways. The 4:3 aspect ratio declines a wide shot option used in most of today’s films. In this way, Hill keeps us focused on what’s in front of us, much in the same way that Stevie showed little focus on anything other than shaping a new lifestyle for himself. The soundtrack and score, handcrafted by Hill along with the duo Trent Reznor and Atticus Ross, is epic, to say the least. Dispersed throughout the film in a medley of 90’s music, ranging from A Tribe Called Quest to Nirvana. Scenes with little to no grandeur in the real world are heightened to epic status. Stevie falling off the top of a building set to a Hungarian rock band called Omega, which Hill borrowed from a Kanye West sample, and the crew running away from police amid a courthouse-turned-skatepark all while a Reznor/Ross crafted soundtrack plays in the back are aesthetic highlights of the film.

Ultimately, through Stevie’s journey towards social acceptance, the audience is entranced with a multitude of experiences. Older audiences will perhaps be reminded of their own rebellious childhood or will be troubled by the lack of dissension they displayed when they were young. Teenage audiences will be entranced by the epic scale that youth is portrayed in, and will most likely be comforted by the ending of the film, which subtly whispers to the audience that all will be fine as long as you have your friends.