The community service is strong with us! On November 10th to 11th, our cadets worked in various locations in the town, as well as the parade at Downtown. Even though it was packed, it was a fun weekend for us!

On Saturday, November 10, we volunteered at two different events, Project 150, and Rock n’ Roll Expo at the Las Vegas Convention Center. Project 150 is a statewide effort in Nevada to help the homeless, displaced, and disadvantaged high school students acquire what they need to succeed. We helped Project 150 to clean up their warehouse as well set up a giveaway. Rock n’ Roll Expo is a registration day and exhibition for the runners, prior to the next day’s marathon. As volunteers, our cadets helped guide the runners to where they need to go and helped them register. Tens of thousands of runners were registered and it was a very busy day for the staffs and volunteers.

The next day, the 11th, Clark NJROTC and Clark Marching Band walked together in the Veterans Day Parade at Downtown Las Vegas, along with hundreds of other organizations. The queue walked a mile on the 4th street, starting from E Bonneville Ave, to Stewart Ave. Thousands of people including exhibitors, spectators, as well as veterans, attended the parade.

Later the same day, about 60 Clark cadets attended the Rock n’ Roll Marathon Las Vegas 2018, as volunteers. The Rock n’ Roll Series hosted marathon around the world, for 20 years. The run is hosted on Las Vegas Boulevard and other surrounding streets. We passed water bottles and snacks along with hundreds of other volunteers until 10 p.m. Over 10,000 runners competed in the 5-kilometer race, 10-kilometer race, half marathon,  and marathon combined, making it another successful marathon in 2018.

Good job to all the volunteers and cheers to all who made the events possible! 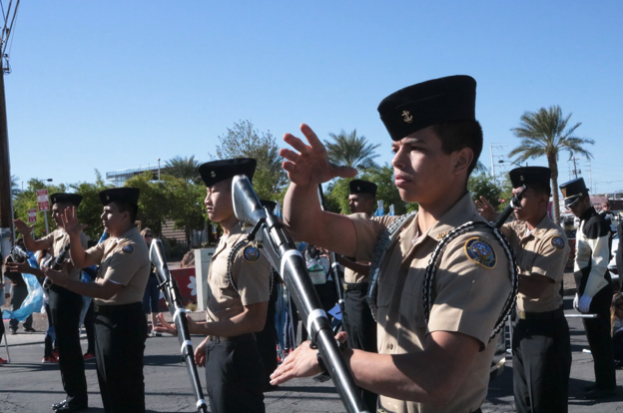