Twelfth Night- A Traditional Play with a Local Twist 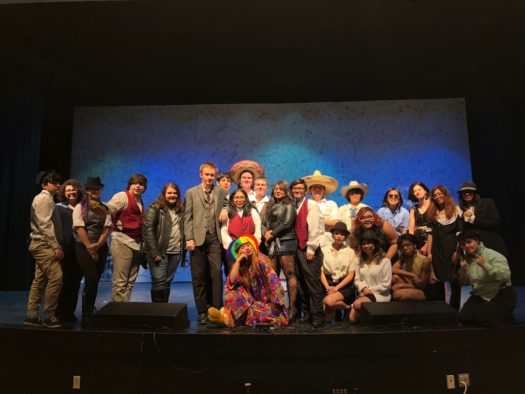 The theater department had their second outstanding play this year with the production of a shortened version of Shakespeare’s Twelfth Night. This traditional play was brought to life with a large cast, the first this year to include freshmen, and a huge modern twist on all of  the characters. It was no longer set in Illyria, the coast of the Adriatic Sea, but it was moved much closer to home – Las Vegas!

This play is about twins who were in a shipwreck and believe the other died in the accident. The female twin must now disguise herself as a man to get a job for a local mob boss, who she soon falls in love with. Love triangles emerge and characters are plotting against one another in order to make life more interesting and hide their own insecurities. Some fan favorites from the performance was the fool who sprays the audience with Febreze during one of her routines, and the mariachi trio that played “My Heart Will Go On” by Celine Dion.

“Being in this play was so fun! It was a lot longer than any other play we had done, which was new and exciting. I love theater… [and] I love doing shows!” says cast member Adalai Zambrano.

Ms. Pennington, Clark’s theater teacher, was excited to put on a play by Shakespeare, as it’s been almost twenty years since Clark has performed one. With the help of Mr. Jay, the technical director, the theater hosted nine shows in just three days. In a successful attempt to include more of the student body in this production, the theater was open to all English and Humanities class so that they could come watch during school. Doing a performance every period for two days was something new Ms. Pennington tried for this play; it involved support from many teachers across campus and lots of work from the students involved with the show.

“One thing I learned while doing theater tech during Twelfth Night was to keep my calm and that things will happen, but everything will be okay.” – Sophie Hoffman

Unlike the first fall show, Twelfth Night was a full-blown comedy and involved the audience’s live reactions more than ever before. Clark’s theater department has produced two impressive shows so far this year, and we are all looking forward to the spring musical.