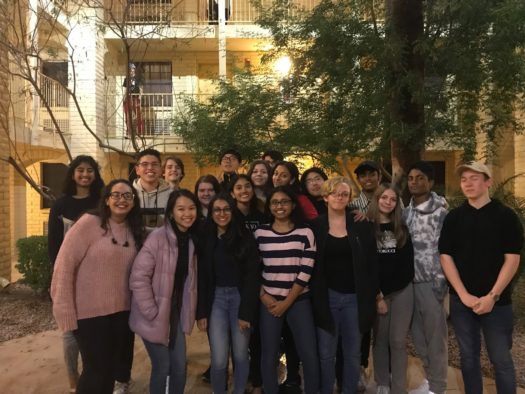 “It was really fun because Clark did better than we have ever before. I am really proud of the team even if not each single person did well, we as a group did…. To see people breaking whom we never had before was so cool… We’ve also qualified for a national tournament which is super exciting!” said Katherine Van Voorhis.

At the competition, Katherine Van Voorhis and Meghana Veermachanani placed as quarter finalists in Duo Interpretation and received their second bid to compete at the National Individual Events Tournament of Champions. In order to compete at NIETOC, they had to earn two bids by placing at specific tournaments throughout the season. Shivam Saran and Rishi Saran have qualified for the Tournament of Champions with a silver bid for reaching the double octa-finals in Public Forum. The last member of the team to place was Opal Vetrichelvan who is a quarter finalist in Program Oral Interpretation.

“Every debate team [had] a winning record and our speech students competed with high scores in all of their rounds…We have several students who did really well and got bids to prestigious end-of-the-season tournaments…The kids learned a lot about different Speech and Debate events, but they also bonded well as a team,” says Mrs. Brown

Team bonding was an important focus of this trip to Mrs. Brown and all of the captains for the team. At the beginning of the season it was clear that the class was becoming more competitive than collaborative, but this trip has really shifted that dynamic. The team went to group dinner at Kabuki, made sure everyone who broke to finals had spectating teammates cheering them on, and celebrated everyone’s accomplishments in class the first day they were back.

Clark’s Speech and Debate team has improved tremendously this season and is optimistic about upcoming larger competitions such as Districts and States.