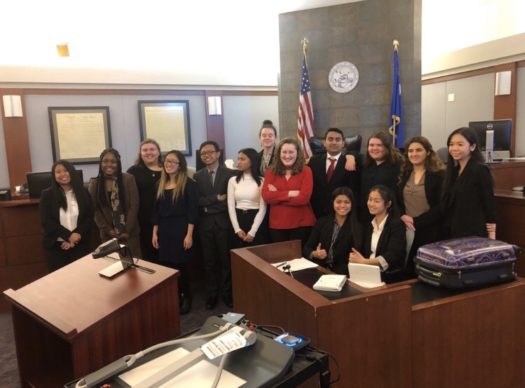 At the courthouse, Clark’s two teams, Clark Black and Clark Gold, were able to compete against other schools in three different rounds. They placed eleventh and seventeenth overall, respectively.

“It was super exciting to compete in the Mock Trial competition and incredible to be able to be in the courtroom, and all the other teams did such a great job. It was a lot of fun to be there,” says Brooke Medeiros, a new member of the club.

“I’m really proud of both teams, it was very interesting getting to see all their progress from the very beginning of the year to now, so I’m very glad I got to be apart of this whole process,” comments Colleen Keene, Mock Trial’s club secretary.

The attorneys who won awards on the Clark Gold team were Himig Reyes and Katherine Gonzalez while the attorneys, Brooke Medeiros and Chrysia Edano, won awards for the Clark Black team. While Clark didn’t win every round they competed in, this competition allowed the members of the club to gain essential experience and insight on what a trial would be like for an actual court case.

“I definitely think our team improved drastically throughout the day and I’m super excited for next year,” says Brooke Medeiros.