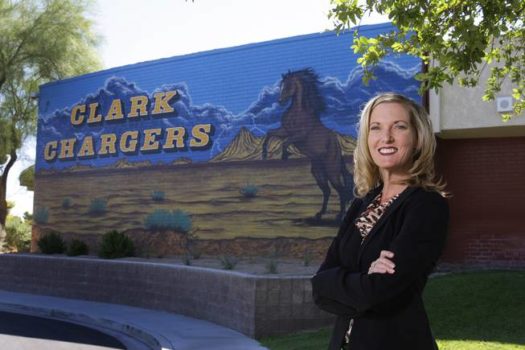 Through a completely unexpected turn of events, Clark High School’s respected and loved principal, Ms. Jill Pendleton, will be leaving her position. As she leaves an unprecedented legacy at Clark, she will be taking on a higher position in the Clark County School District.

She has been promoted to the role of associate superintendent, which entails the oversight of principals and their schools within the district. The new superintendent divided the district into 3 regions, the third of which is under the jurisdiction and support of Ms. Pendleton.

Leaving Clark is going to be a dynamic shift for her.

Beyond the administration, Ms. Pendleton is going to miss the unique relationship she has formed with students over the past years. Through every one of her initiatives, the well-being of the student body has always been her primary goal.

“Being able to work with all you high-flying academic achievers is what makes my job enjoyable. I don’t know if you guys have noticed this, but I’m your biggest cheerleader.”

Her support, however, would not have been possible without the amazing teachers at Clark. She attributes much of her success to these teachers.

“We have so many extraordinary teachers which is what makes my job so much easier. I am so grateful for each and every one of them.”

While she is sad to depart from Clark, a school she has been with for nearly 10 years, she is excited for the future. As a veteran principal, she has acquired so much experience that she is willing to share with others in order to improve the education of the district.

“I think that what I’m most excited about going forward is sharing what I’ve learned with other principals,” says Ms. Pendleton. “Hopefully, mentoring and inspiring those individuals to improve student achievement in their schools to create a greater impact across the system.”

During her time at Clark, Ms. Pendleton strongly encouraged students to embody a similar learning environment, one anchored on the exchange of experiences. Whether it was supporting a student walk-out to bring attention to the Marjory Stoneman Douglas High School shooting or cheering on the sidelines for our basketball team, Ms. Pendleton always showcased her unwavering support for her students. By understanding students’ unique experiences and applying that to her work at Clark, Ms. Pendleton supervised one of the most respected administrative teams and some of the most successful student bodies Clark High School has ever seen.

After being asked what her last words to Clark High School would be, she said there was only one answer: “Respect the C.”