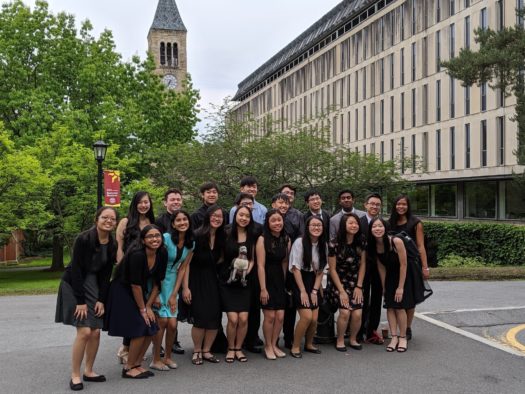 Last Thursday, Clark Science Olympiad held its first official team meeting of the season. After a three-week period of tryouts including over sixty prospective students, the club’s members were excited to get started on their new year.

Tryouts are run as closely to real tournaments as possible, forcing members to prepare months in advance to competitions. “It’s an advantage we have over every other team in the state,” says Secretary Austin Park, “And it’s something we’ve seen teams from other states—teams who win at nationals, who we look up to—do to make their members prepare early as well. It’s how we know we’re doing things right.”

A lot of that “doing things right” has to do with Mr. Miller, who started Clark Science Olympiad in 2009, and has since expanded his team of coaches to include Mr. Viggato, Mr. Dehne, Mr. Tabish and Mrs. Miller. Under his leadership, Clark’s team has achieved a decade of success, transforming Clark from a state champion to a formidable competitor at the national level.

Now entering its eleventh year, the club is coming down from a high of unprecedented wins. Last year, the four teams brought home 28 invitational medals from five tournaments across the country, swept Nevada state with 63 medals, and broke top 20 at nationals.

Many attribute last year’s successes to an unexpected combination of strong senior and freshman classes. “It’s rare that you have [freshmen] coming in performing at the same level as these seniors who are going into their fourth (for some of them who’ve been doing [Science Olympiad] since middle school, seventh) year of doing this” says Mr. Miller, “But it happens, and last year, the freshmen brought their A game.”  And last year, 2 freshmen made it alongside 7 members of the senior class to be part of Clark’s prestigious 15-member A team.

Class of 2019 is notable because it was during their high school careers that Clark Science Olympiad grew the most. They were the class to experience Clark’s first invitational trips, who made winning medals at prestigious competitions like the MIT Invitational or Nationals not just a possibility, but a standard that every member of the club could live up to. Their class had the largest impact on the climate of Science Olympiad, which Co-President Ashley Su describes as “insanely competitive at the same time that it’s a close-knit family.”

Any uncertainty and fear anyone may have had about the upcoming season after that class’s graduation was immediately put to rest after tryouts. “Yes, there’s strength in numbers. That’s why we have four teams; that’s why we would have five teams if more people tried out. But that’s not all of what makes us good, neither is it all of what made [Class of 2019] good,” Ashley Su says, “Our current members are fiercely committed to the competition. It’s something all of us learned from [the seniors]. It showed at tryouts; it shows now with this year’s teams. We have quality partnerships and quality resources at our disposal, so I’m not worried.”

Still, last year’s competition performance will not be easy to beat. At the team meeting, the officers announced this season’s invitational schedule, which will kick off with the Camas Invitational in Vancouver, Washington this December. In the New Year, members are excited to see Clark host its first ever invitational, dubbed SOLVI (Science Olympiad in Las Vegas Invitational), as well as to travel to the MIT and SOUP (Science Olympiad at UPenn) invitationals later in the school year.

Apart from members’ responsibilities to prepare for competition, the club expects many changes this year, including reduced funding, tournament registration, and the newest arrival to Clark Science Olympiad’s family: Mr. and Mrs. Miller’s daughter, who will be born later this week.

According to the officers, these changes have forced them to become even more heavily involved in the day-to-day operations of the club. Vice President of Networking Kara Orevillo comments, “There’s definitely a lot more responsibility being placed on the student officers this year to run and manage the club. We have to balance our [competitive] events with management. It’s difficult, but we have each other’s backs, and we approach all the setbacks we face head-on because at the end of the day, we remember how rewarding the club is.”

The 9-member officer team says it’s the days of the team meetings that really remind them of why they put in all the extra hours that they do. Seeing their members crowd into Mr. Miller’s room, eager to dive into competition creates an atmosphere of excitement that makes everything worth it. Ashley Su says, “We see they’re just as passionate about this competition as we are. That support is irreplaceable.”