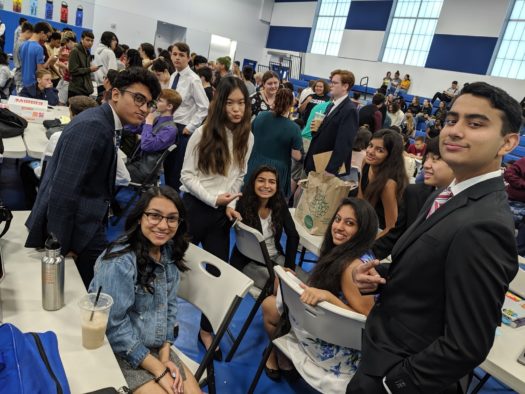 After more than a decade under the lead of Mrs.Brown, Clark Speech and Debate has recently had a coaching shift. The team is now under the wings of Ms.Sarver, a fresh change to its course. Despite having just started, her ambition and eagerness have disseminated through the club.

While Ms.Sarver is new to the coaching position, as the previous ELL coordinator, she has had plenty of experience with the students of Clark. This helped in smoothing the transition between Brown and Sarver. Initially, many were slightly apprehensive of the change.

Club Vice President Katherine Van Voorhis recalled her nervousness, saying “I loved having Ms. Brown my first 3 years…but in general things seem to be going in the right direction. Ms.Sarver really does give the club her all.” The hesitation of many of the members has quickly diminished. Sarver’s liveliness has played a large part in this decline, helping move the team alongside the change. Voorhis elaborated, explaining that “Ms. Sarver’s very energetic and she likes making connections with people on a personal level. She has no shortage of playful sass and energy.”

Despite differences in factors such as seniority and coursework, the team’s strength and motivation has become a crucial unifying factor. “…The class’s behavior aligns [now].The seniors have fallen in line, the juniors have grown in a way that has made it easy to rely on them, the sophomores are stepping up, and the freshmen are learning a lot,” says Club President Brock Walker.

In short, the students’ passion for Speech and Debate has been rekindled.

With its determined debaters and spirited speakers, the club is more than ready to dive into the new season. Their dedication speaks (and debates) for itself, as the team received an impressive third place at their most recent tournament at Foothill High School (you can read about this here). Their next tournament will be on December 6th and 7th at Rancho High School.