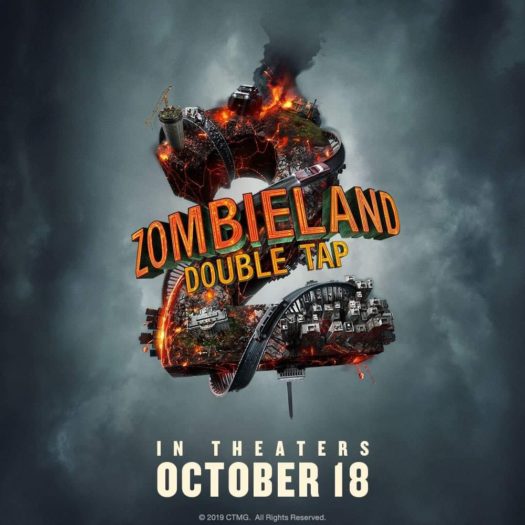 After seeing the Rotten Tomatoes 68% rating, I’ll be honest- I was prepared for Zombieland: Double Tap to be an underwhelming, barely funny, badly acted film about some people who like to kill zombies, just like so many comedy sequels. However, from the opening line to the crazy ending, I was pleasantly surprised by one of the most enjoyable films I’ve seen in a long time.

When I first watched Zombieland 2, I hadn’t watched the first film, Zombieland. With all the references and funny throwbacks, you might think that that was a mistake, but after going back and watching both, I actually enjoyed the sequel more without having watched the first film. It might be because Zombieland 2 does fall into some of the traps of many sequels: reused jokes, over-the-top references (like the strange, unnecessary post-credits sequence), and incremental narrative developments (perhaps, I hope, to set up a third film). Despite these rather obvious flaws, Zombieland 2 still manages to find a way to be both hilarious and continue the brand of originality that made the first movie so fantastic.

Zombieland 2 is addicting in the way that a TV-show episode is addicting. It draws you in quickly, gets you hooked with some action, and finds unique ways for you to connect with the characters. That being said, the reason for the gap in audience and critic reviews is clear; the film lacks a useful plot. In that way, it would be an incredible TV episode, setting up for a thousand cool followups, but lacks the enjoyable and meaningful narrative that the original film managed to convey. In fact, if a TV-show were to be created, I have a feeling it would be a fantastic hit new comedy. At an hour and forty minutes in run-time, this just doesn’t feel like enough.

It seems like the writers knew just how much they were borrowing from the old film, especially when using the same cast, so when they could possibly change something up, they changed it up. From the White House to Graceland to a wild hippie-utopia called Babylon, the setting of Zombieland 2 can feel both refreshing at some moments and needlessly chaotic at others. The colorful and excessive feel of the setting adds to the playful tone of the movie, but at certain points it feels like a change in scenery just… because.

The acting, given such a talented cast, was on point. Woody Harrelson didn’t have the carry the movie quite so much in the humor department with the introduction of some new characters. Perhaps the best addition to the movie is Madison (played by Zoey Deutch), a genuinely hilarious airhead who produces some of the best laughs in the whole movie. She adds a breath of freshness that captures some of the magic of the first film. Meanwhile, while there is a noticeable amount of reuse from the first movie, the jokes manage to land well enough that I found myself laughing through much of the film.

Overall, I would highly recommend taking the time to watch this movie, especially with its short run-time. It’s fun and inventive, and while major film components like the score and plot are lacking (especially when compared to the original), the film manages to make up for it in pure comedic value, an excellent cast, and a solid dose of the same fun that made Zombieland such a hit.