1917 and Saving Private Ryan: A Comparison 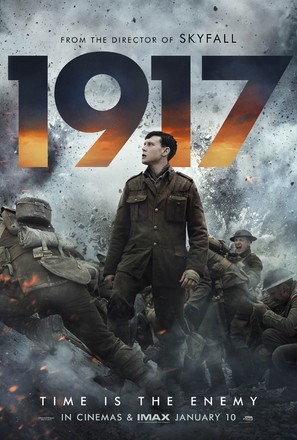 After 1917’s theatrical release on December 4, it has accumulated numerous accolades. Due to its “one shot in one take” tactic, it has been labeled by many as one of the most ambitious films of 2019. After winning Best Film in the Producers Guild of America Awards 2019 and Best Director and Best Drama at The Golden Globes, some have even called it one of the best war films ever made. Its recent Oscar nominations for ten different categories, including Best Picture, Best Director, and Best Cinematography, have only increased the hype.

1917 may be one of the best films of 2019, but the comparison to Saving Private Ryan helps demonstrate both its many triumphs and its many failures.

The whole of 1917 is claimed to be shot in “one cut”. A cut, technically, is a series of frames that runs uninterrupted for a period of time (in this case, a very long period of time). That means no cuts when the characters are sleeping, no cuts for transitions to different settings with new characters, and no quick cuts away from battle scenes. While there are, obviously, hidden cuts, the long take technique forces the director to sacrifice quite a few important cinematic elements. The settings, which tend to be of one style for a lengthy period and then rapidly shift to a new setting, contribute to the feeling of levels to a video game that many reviewers have bemoaned. The few obvious cuts that do exist create these setting-to-setting transitions, causing the movie to feel unfortunately close to a game’s classic story mode. Meanwhile, the decision to shoot in one take limits the plot significantly, as it’s difficult to see a variety of different story lines come together or to have longer action scenes.

Despite the sacrifices, the cinematography comes through in one big way: its viewer involvement. While at some points it does feel like a game, at other points, as you watch in real time as a cave collapses around you without a single cut to relieve the tension or remind you that you’re in a movie theater, you suddenly feel very intimately affected by the events in the film.

Unfortunately, in comparison to Saving Private Ryan, this sense of viewer involvement feels squandered. The decision to eschew the very visual violence of war in 1917 in favor of the “aftermath” settings in the film, while interesting and somewhat original, is simply the wrong fit for a long take style. The intensely realistic and brutal portrayal of D-Day at the beginning of Saving Private Ryan is perhaps one of the most incredible sequences of film ever made. Spielberg’s ability to show the event with such devastating, harrowing realism forced the viewer into the shoes of a soldier on the ground during D-Day. Obviously, 1917 director Sam Mendes felt that such brutality was unsustainable and would be overwhelming if it became the entirety of the film, as may have been necessitated by the long take; he might be right, but on the spectrum from too little graphic violence to too much, 1917 finds itself far off center. While Mendes makes the viewer feel involved in the scene, the scene you’re involved in very rarely develops the same level of poignancy and realism as in Saving Private Ryan. That isn’t to say the film lacks tension, but instead that in its commentary and portrayal of the horrors of war, it is comparably tame.

On the other hand, when 1917 does decide to show violence, the results are incredible. This is not because of the shocking violence or intense viewer involvement, but instead because of the cinematographer’s use of the camera to capture the unique and beautiful color enabled by fire and mortar shells. There’s one scene in particular in which a character sprints through a burning city while dawn rapidly approaches that is nothing short of spectacular. The combination of colors and shadows ebb and flow on the screen, the camera never ceasing to capture it all. That single set rivals any other I’ve ever seen, including the chaotic combination of hedgehogs, barbed wire, and mines that create the set of the opening sequence of Saving Private Ryan.

The plot of 1917 is aggressively simple, and it never, the whole movie, tries to become more complex than what you’d originally believe. In some ways, that’s a blessing; it leaves time for scenes like the one where a character floats down a river covered in cherry blossoms, only to be greeted at the bank by a pile of corpses. Still, because of the plot’s simplicity, it feels like much of the film’s run time is dedicated to the director’s film-making ability or character development disguised as story.

It is impressive that the lead characters are able to handle so much of the movie, because it’s the two of them who essentially become the entire plot. The sheer quantity of screen time that had to be spent staring at these two men, as necessitated by the shot style, must have been daunting; I can’t imagine the casting process. Thankfully, they pull it off. In a film that quite literally lasts just a few hours, in both run-time and story length, the extent of the character development is surprising in both quality and quantity. In some ways the development of just two characters is much easier than what Saving Private Ryan had to do with its entire squad. In other ways, it’s much harder; due to the movie’s time frame, if the director had attempted to create undeserved jumps in character arcs, they would have been far less believable.

1917’s plot reminds me of that quote you can often find while crammed in a seat far too small during a long airplane ride: “It’s about the journey, not the destination”. This film takes that sentiment to heart, as the ending is abrupt and relatively unsatisfying. The journey was engaging and frequently interesting, but it ends before we really get to see the destination. Contrast this to Saving Private Ryan, whose “earn it” quote feels like more than just a line of dialogue from one character to another, but a message that the director needed us audience to hear. It not only brought together the director’s vision but the whole of the movie, making us realize that maybe those men on the beaches at D-Day want us to earn their sacrifice, just as much as Captain Miller wanted Private Ryan to earn his.

The score of 1917 is very impressive, and its use in the film is well done. Songs like 1917, Gehenna, and A Scrap of Ribbon are the perfect choice to build that feeling of post-war decay that the film tackles. Their rising and falling orchestral numbers create powerful effect, especially when combined with the particularly poignant cinematography and color in multiple scenes during the movie. Meanwhile, quiet vocalizations in songs like Les Arbes help contribute to the “breathing points” in the film.

However, the score completely misses the mark with songs like Up the Down Trench and Tripwire. The movie builds quite a bit of tension by simple nature of being a war movie, and while the viewer finds their heart pounding naturally throughout many of the scenes, the rapid transition from silence to completely ominous or rapidly pounding bass as a background to tense scenes was rarely the right choice. For example, in one scene, two characters are walking around a room carelessly when they suddenly realize that there is a tripwire somewhere in the room. Rather than creating the absolute silence that would’ve made an explosion or a change of scene so much more elegantly juxtaposed, they instead decide to suddenly insert artificial music that sounds like it was pulled off a playlist called “music to build tension” and then cranked up the volume. Compare this to Saving Private Ryan, whose trumpet solos and drum cadences create a powerful but often gradual swell that matches the movie’s violent scenes, alongside the quiet orchestral music that matches the “off-moments” of the film.

1917 does a great job at what it seeks out to do: create a post-battle hellish atmosphere whose long-take tactic completely involves the viewer. However, the decision to leave out the harrowing scenes that empowered war classics like Saving Private Ryan results in a far less impactful film. Meanwhile, the attempts to replace this power with artificial and unnatural tension-building through tactics like the inclusion of more aggressive musical numbers come up short. Still, the rare combination of fantastic cinematography and occasional soundtrack success sprinkled throughout the movie result in some truly spectacular sequences that make 1917 one of the many must-watch movies of 2019.