“My Beautiful Dark Twisted Fantasy”: The Album of the Decade 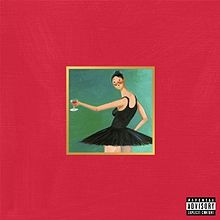 As we enter the 2020s, it is important to recognize the significant changes pop culture has gone through over the past 10 years. The 2010s were a pop culture explosion, with the internet enabling users to create and share content globally.

Music was one of the most influential factors that shaped the culture of the 2010s. Albums such as “Good Kid m.A.A.d City” by Kendrick Lamar,  “Long. Live. ASAP.” by A$AP Rocky, and “Barter 6” by Young Thug revolutionized the music industry. While these albums are undoubtedly fantastic, the truly standout piece of the decade has to be “My Beautiful Dark Twisted Fantasy” by Kanye West. This opinion is widespread; Billboard, Rolling Stone, and New York Post have all named it the best album of the decade.

Released on November 22, 2010, “My Beautiful Dark Twisted Fantasy” was West’s fifth studio album. After the loss of his mother, his breakup with Alexis Phifer, and his now infamous Taylor Swift acceptance speech interruption at the MTV Video Music Awards, West was facing public backlash.

In the midst of this public anger, West viewed “Eyes Wide Shut,” a film by the late Stanley Kubrick. This film inspired the creation of West’s fifth album; he modeled the sounds and mood of the album after the message of the film. The essence of the album is West’s attempt to open up about diving too deep into society and being shamed for his actions.

“My Beautiful Dark Twisted Fantasy” was produced by multiple artists and producers, including RZA, Jay-Z, Rihanna, Kid Cudi, and Nicki Minaj. The album was not intended to redeem West’s public image, but rather to reflect on his inner thoughts. Some of the most popular tracks on the album were “Devil In a New Dress”, “All of the Lights”, “Runaway”, and “Power”. The style of the songs was original, including orchestras, guitars, and self-reflective subject matter. This album paved the way for future hip hop artists and ignited a wave of collaborative writers working together on one album.

West’s “Runaway” (Film) is one of the first films made for an album and introduced ballet into a culture that was dominated by materialism and a false construct of masculinity. “My Beautiful Dark Twisted Fantasy” won West his second Grammy for best rap album in 2012. This album still stands as West’s magnum opus, and proved his versatility, determination, and bravery in creating music. Kanye West’s beautiful, dark, twisted fantasy reflects what humanity dreams to create: The ultimate expression of ourselves by opening up to the world.