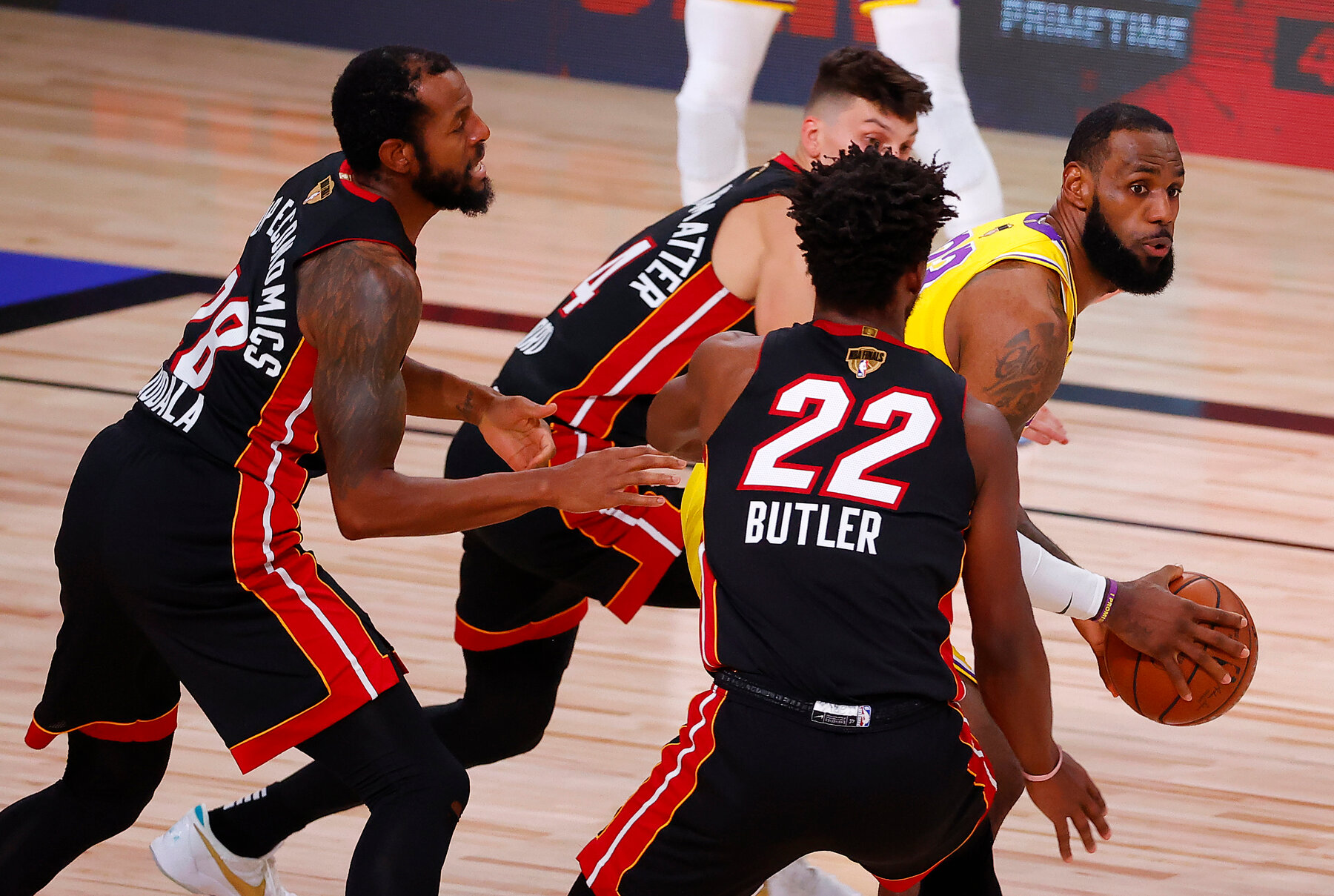 After five months of COVID-19 shutdown, the NBA commenced a reopening plan in August in the Orlando “bubble”. This plan consisted of twenty-two teams playing eight seeding games for a position in the playoffs; first team to four wins wins the series.

Expectations about the final series were subverted when the fifth seed Miami Heat beat out top seeds to represent the Eastern Conference against the heavily favored Lakers, the first seed in the Western Conference.

The Heat, led by Jimmy Butler, entered Game 1 living up to their name with their fiery success. Butler and company showed up, made shots, and embraced the underdog mentality. The dominant Lakers, led by LeBron James and Anthony Davis, had confidence of their own, as they had been coming off of a quick 5-game Conference Finals series against the Denver Nuggets.

The Heat opened the game firing on all cylinders and quickly attained a 23-10 lead. However, the Lakers rapidly tied up the game at 28 points by the end of the first quarter.  So far, this was the close game that many NBA fans were hoping for.

However, the tide of the game rapidly changed when starting point guard Goran Dragic, a seasoned veteran on the Heat who had had an amazing playoff season, was injured in the second quarter. The Lakers assumed a 65-48 lead by halftime. Miami’s defense could not contain Anthony Davis and LeBron James, and the Heat’s offense didn’t have the same electricity that had won them their past few games. In order to have a chance of winning the game, Miami would need to simply make more shots from the perimeter and try to fill in for the void that Dragic left from being injured.

Unsurprisingly, the Lakers kept their momentum going, and at one point in the 3rd quarter, they were up by 30 points. To make matters worse, All-Star power forward Bam Adebayo suffered a game-ending shoulder injury in the 3rd quarter, and Jimmy Butler hurt his ankle but continued to play. With two starters out of the game and their star player with a minor injury, the Lakers had the game almost locked up with a 93-67 lead.

The Heat’s downward trend continued through the fourth quarter, with Jimmy Butler re-injuring his ankle and Miami slowly falling apart. Although they put up a good fight towards the end of the game, it was too little too late; Miami lost the game 116-98. Anthony Davis led the scoreboard with 34 points, followed by LeBron with 25 points. Lakers role players such as Kentavious Caldwell-Pope and Danny Green contributed to the win as well. Jimmy Butler, the only player on the Heat to score 20+ points, put up a respectable 23 points in the game.

Here are some key takeaways from the game: 1) Goran Dragic is a vital player in the Miami scheme and without him, Miami has a slim chance of winning the series. 2) Experience is key during the NBA Finals, and LeBron’s experience and the Heat’s inexperience (except the experience of HC Erik Spoelstra) will surely play a role in close games. 3) Miami needs to shoot and make more 3s to have a chance in this series, and they can do this by trusting Tyler Herro. 4) Jimmy Butler and Bam Adebayo need to be healthy for Miami to have a chance. Miami will be unlikely to win without both playing at 100%.