A Project for Better Journalism chapter
The Charger Chant
Lifestyle 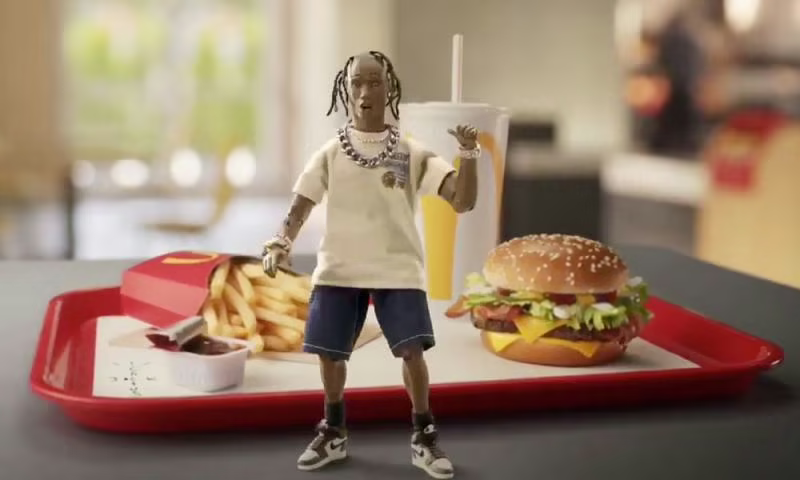 IT’S LIT!!! At 630 calories, coming with medium fries, a small container of BBQ sauce, and a Sprite, the Travis Scott Burger is definitely worth the six dollars for a simple but delicious meal. Made up of the normal quarter pounder ingredients (the 100% fresh beef patty with two slices of melted cheese, ketchup, mustard, and pickles), the burger also adds in new twists like fresh, shredded lettuce and crispy bacon that adds just enough salt to up the flavor. Travis Scott, or “Cactus Jack,” also released other McDonald’s themed and normal Travis Scott merchandise with the release of his meal, including the coveted $90, 36-inch chicken nugget body pillow. Unsurprisingly, the day of the release found many fans lining up at fast-food chains nationwide to get their own Travis Scott meal. But why all the hype? And why Travis Scott?

An avid lover of fast-food chains since his childhood, Travis Scott is the second celebrity in McDonald’s history since Michael Jordan to reach a collaboration with the company. His name alone hyped up the new advertisement and has led the the New York Times to call the partnership “…an unprecedented collaboration among food, fashion, and community efforts… a melding of the merchandising minds.”

The success of the partnership was to be expected – Scott’s past collaborations have been wildly popular (e.g the Reese’s Puffs Travis Scott Cereal boxes, which had many stores restocking their cereal sections multiple times a week).

Backed up by the recent Tenet soundtrack release and Nike Travis Scott Air Max 270s, the recent merchandise hype surrounding Scott was already on the frontlines of the fashion community’s mind. With almost sixty other drops released in the past few weeks, prices for these “holy grail” items have risen immensely in price, especially the beautiful lifesize Travis Scott cardboard cutout. Some have even bought these deals to sell them at higher prices on third-party online shop sites, such as eBay, for $150 or higher. The simple name brand “Travis Scott” has become a trend so valuable, it can make any product instantly valuable.

So, how do both parties benefit from the partnership anyway? For Travis Scott, partnering up and creating a TV commercial with the globalized McDonalds (with over 13,000 chains in the U.S alone) definitely will promote publicity for Scott.  His name has now extended past his fans, his music, and the occasional Fortnite concert into global marketing and mainstream ads. His merchandise isn’t just sold at concerts or online shopping sites – now it’s even distributed throughout physical locations with guaranteed drop rates, which will pique the interest of many fashion enthusiasts.

For McDonalds, the company gets a much-needed revival with the Travis Scott Burger and  co-branded merchandise appealing to the younger generation. Although McDonald’s is a prominent chain in the fast-food industry, the company has seen an overall decrease in revenue starting from 2013, with the total global revenue currently at $21 billion compared to the previously $28 billion annually.