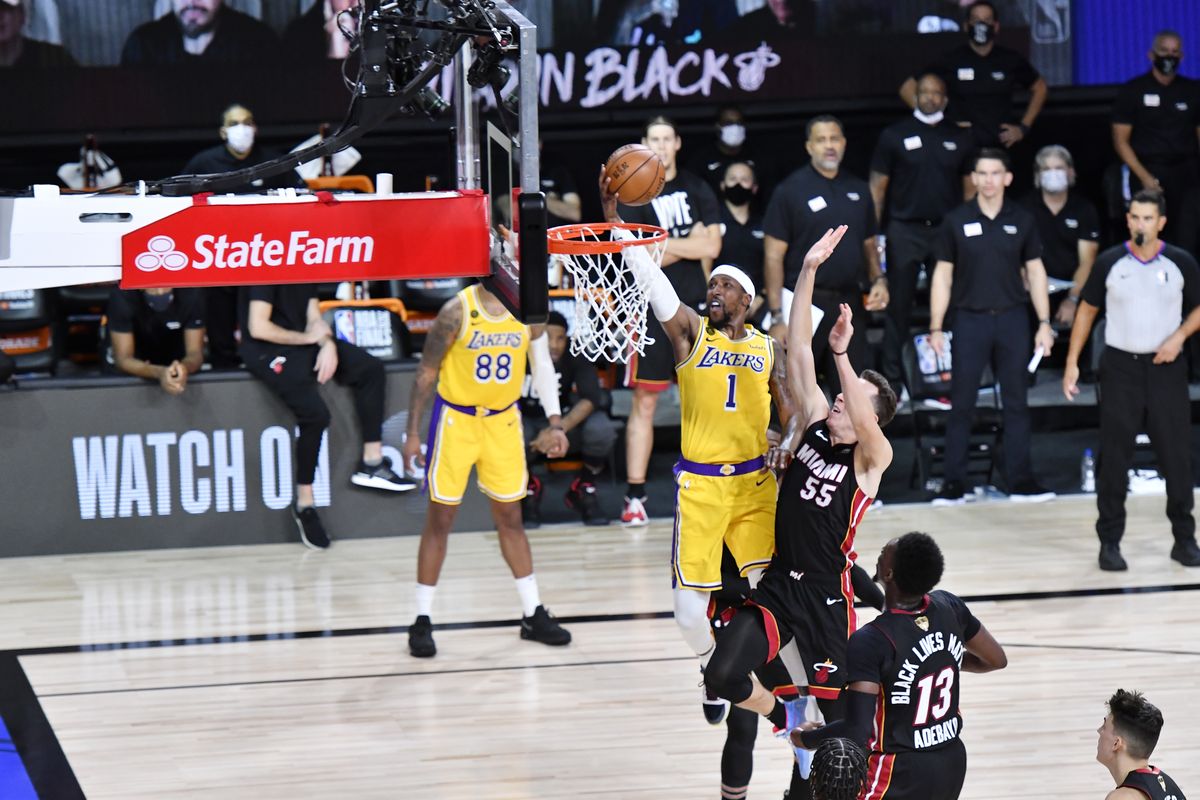 After the Miami Heat’s upset against the Los Angeles Lakers on Sunday, NBA fans were looking forward to game 4 in what was becoming a contentious finals series. The Lakers were still up 2-1, and winning Game 4 would be pivotal for both teams.

Game 3 was unique for the Heat, as they managed to establish a lead very early on in the first quarter. Miami began Game 4 the same way, giving hope to their fans that the series could be tied up even without one of the Heat’s star players, Goran Dragic. Throughout the first quarter, the game stayed about the same- the Heat would gain a large lead, and the Lakers would catch up, keeping the score extremely close. Initially, the Heat neutralized LeBron James’s and Anthony Davis’s impact on the game, something they knew would be necessary in order to win. By the end of quarter one, the Lakers had taken a 27-22 lead, but fans knew the game was far from over.

Quarter Two began with a bang from the Heat, who brought the score to 30-27 in the first few minutes. Bam Adebayo’s presence on the court transformed how the Heat played, especially because he was out for both games 2 and 3. With virtual fans cheering them on, the Heat seemed complete, and hope filled the minds of their fans and the players. Unfortunately, this hope slowly dwindled away throughout the course of the second quarter as Davis and Kentavious Caldwell-Pope (KCP) showed fans exactly what they can do. The Lakers would take back the lead by halftime, and the score was 49-47.

Defense and ball movement defined the third quarter, and LeBron and Davis took over the game. Heat head coach Erik Spoelstra was unphased and maintained his composure, trusting his players and keeping the score deficit relatively small. The Lakers led 75-70 entering the fourth quarter. Could the Heat close the gap and pull off a win?

Most of the fourth quarter was similar to the first quarter: the game was tight, and you could feel just how much each team wanted to win. With around three minutes left, the winner was still not obvious. The Lakers led, but it was still unclear if the Heat could make a comeback. KCP would hit a clutch three and lay-up to extend the Lakers’ lead to seven points. The determination and grit that have characterized the Heat all playoffs long kept the score close, but Rajon Rondo would score a crucial lay-up, followed by a three by Davis to seal the game for the Lakers. The final score was 102-96, and the Lakers now have a very commanding 3-1 lead in the series.

Statistically, a 3-1 lead is not a good look for the losing team, but coming back isn’t impossible. In fact, LeBron James pulled off a comeback down 3-1 back in 2016. The difference is that this time, LeBron is on the winning side of the series, and he is not known to give up large leads. Can the Heat hang on to title hopes by winning Game 5, or will the Lakers finish off the series and become the 2020 NBA Champions? Tune in tomorrow at 6 PM PT to find out!